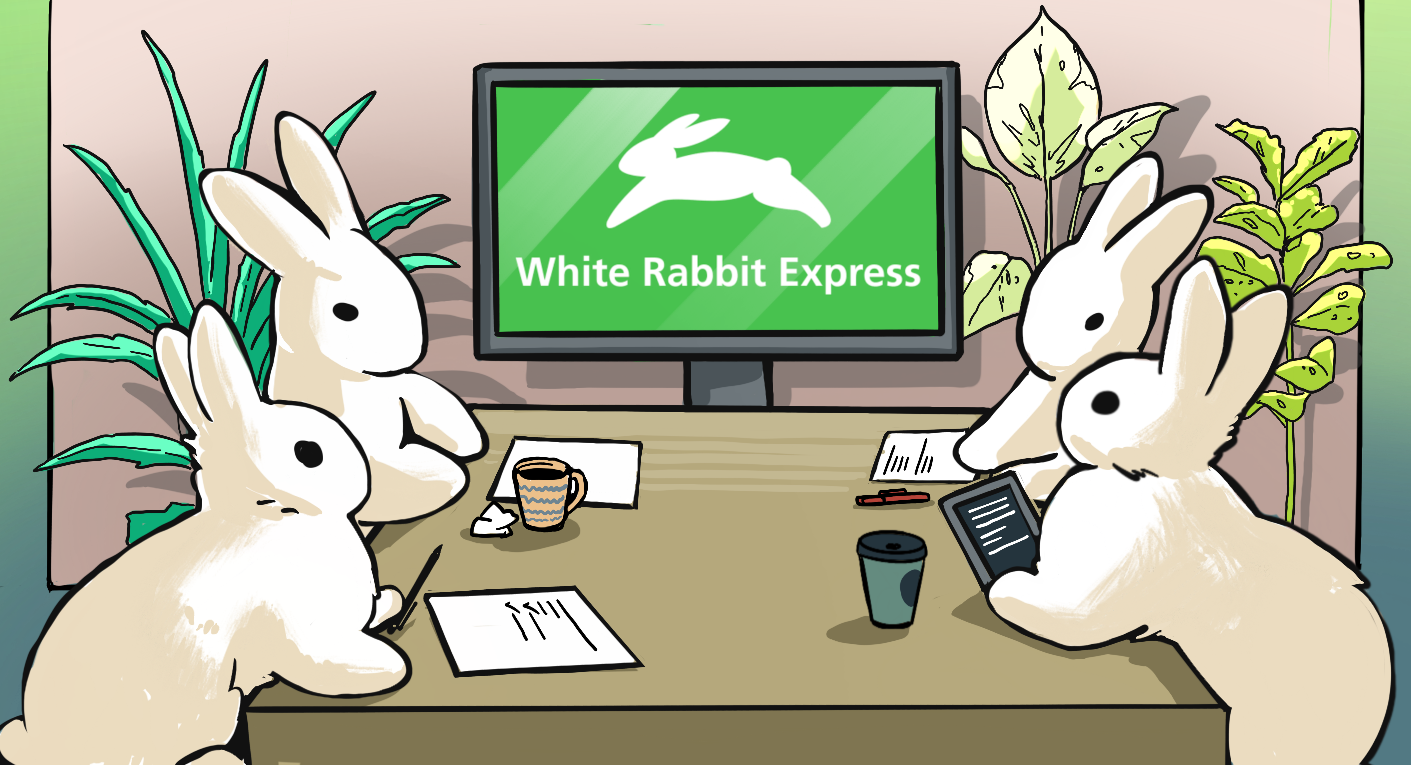 We use Monday.com for all our project communication, task management, pitches, and announcements. A single centralized tool keeps everything together and creates a single source of truth for everyone across the company. We rarely use email internally. Ops and Customer Support Teams frequenty communicate via notes in Help Scout. We use Zoom or Google Hangouts for the occasional video conference between two or three people. And product teams occasionally discuss a pull request in GitHub.

We rarely have in-person team or all-hands meetings; instead, we prefer focused collaboration between just two or three people.

Studies are piling up showing that adding more team members may actually hinder team productivity overall. For example, researchers Staats, Milkman, and Fox conducted a study in which teams of two and teams of four were tasked with building a Lego structure. The two-person team completed the Lego structure in 36 percent less time, even though the four-person team was almost twice as optimistic about outperforming the smaller team.

Consider where you put things. The right communication in the wrong place might as well not exist at all. When someone relies on search to find something it’s often because it wasn’t where they expected something to be.

# The perils of group chat

Yes, chat is appealing. In the same way sugar is appealing. And cigarettes are appealing. It provides short term communication pleasure at the expense of long term organizational health. All sorts of things begin to go wrong when groups begin communicating in real-time, one line at a time, all the time.
— Group Chat: The Best Way to Totally Stress Out Your Team

While group chat certainly has some valid use-cases, we encourage team to communicate via Monday.com and strongly caution against relying too heavily on group chat as a first option.

Group chat is like being in an all-day meeting, with random participants, and no agenda . . . What began as a novel way to quickly communicate company-wide has become a heavy-handed interruption factory with serious consequences.
— Group Chat: The Best Way to Totally Stress Out Your Team

Basecamp's article Group Chat: The Best Way to Totally Stress Out Your Team makes so many insightful observations on the perils of group chat that we encourage you to read it in its entirety.

# Rules of thumb, and general philosophy

Below you'll find a collection of general principles we try to keep in mind at White Rabbit when communicating with teammates, within departments, across the company, and with the public. Our style of communication may be challenging at first if you're coming from a workplace where frequenty meetings are the norm. While these ideas aren't strict requirements, they serve as shared practices to draw upon when we do the one thing that affects everything else we do: communicate.

# Why We Avoid Meetings 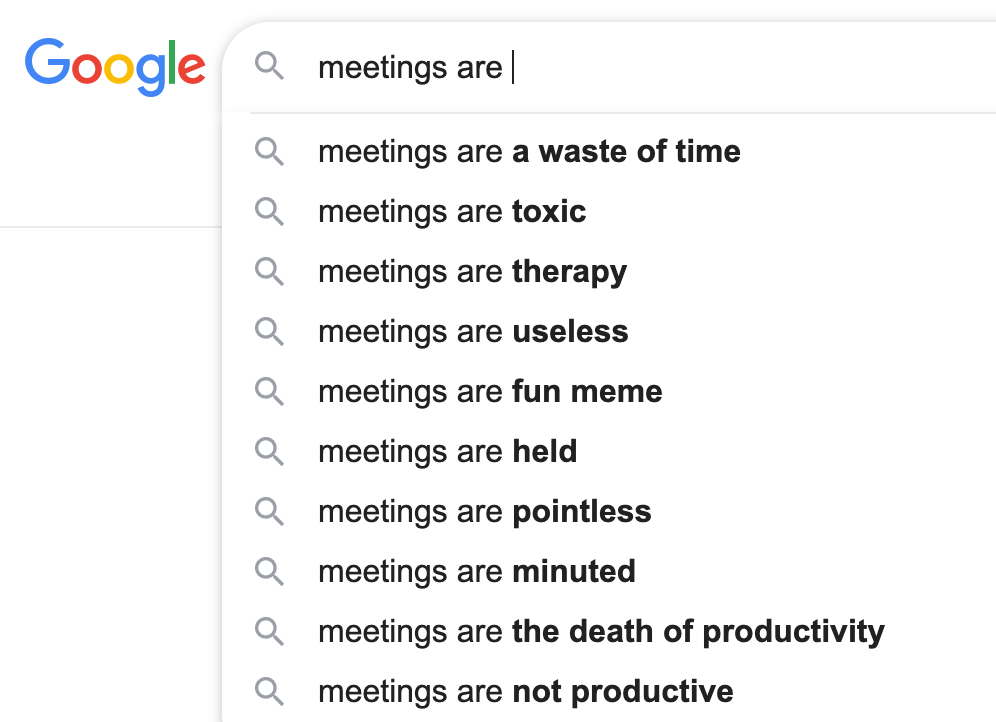 Meetings should be a last resort; not the first option.

People’s time is highly valuable so all meetings should be purposeful and well-executed. Five people in a room for an hour isn't a one-hour meeting, it's a five-hour meeting. Be mindful of the tradeoffs.

Meetings cater to extroverts. Some people fail to speak up in meetings for a variety of reasons. They might not enjoy being in the spotlight, or they are put off by those who frequently interrupt or have a particularly aggressive or confrontational style of debate. It's the organizer's role to mediate and so that everyone a voice; otherwise, what's the point of having all these people at the table. You could have just writte up an Announcement instead.

Extroverts are more likely to say what they think and talk through their thought processes, while introverts take in the information and sort through it in their own heads. Meetings will see more extroverts getting to contribute than introverts. The introverts in the room often go unnoticed; even if they have a game-changing idea, it may never get shared.

# If you must have a meeting

Take into consideration the purpose and format:

One-on-one meetings
Scheduled weekly meetings you and your manager to check-in and see how everything is going. These are typically around 30-minutes in length. The manager’s job is to listen, ask probing questions, and uncover ways to improve.

Staff meetings
Among a manager and team for structured free discussion, sharing of different points of view, and decision making. Managers here balance being leader, observer, expediter, questioner and decision-maker—but avoid lecturing or weighing in too soon or too heavily to bias decisions that should be owned by the team.

Operational reviews
Where one organization presents to others to share information and receive questions and feedback. Managers play a critical role in keeping these very expensive meetings on-track.

Mission-oriented meetings
Created ad-hoc to reach a decision. These should be rare. The meeting chair should be well-prepared and ensure the people vital to reaching a decision attend and are also prepared.

Keep meetings short and stick to the agenda.

Make it harder to call a meeting. To call a meeting, the organizer must circulate an agenda in a Monday.com team board so attendees have an opportunity to prepare.

Avoid social loafing. Meetings are for consensus building. With few exceptions, problem-solving should occur before the meeting, individually or in very small groups.

In social psychology, social loafing is the phenomenon of a person exerting less effort to achieve a goal when he or she works in a group than when working alone and is seen as one of the main reasons groups are sometimes less productive than the combined performance of their members working as individuals.

Be fully present. People use devices during meetings to escape monotony and boredom, which subsequently makes meetings even worse. Devices in everyone’s hands makes it more difficult to achieve the purpose of the meeting. With the exception of one laptop in the room for presenting information and one for taking notes, leave devices outside.

Assign a Scribe. Designate someone with the role of note taking during any meeting. Summarize the meeting decisions in a Monday.com post created for the agenda.

Have a standing meeting. If you must have a meeeting, consider a stand up meeting. Stand ups can be 35% shorter, with no loss of decision quality.

# Consider not having a meeting at all

Meetings are often expensive and inefficiently ways to make decisions. Often some people can meet soon,but others can't, so discussions and decisions get put off until everyone's calendar can be synchronized. Communication shouldn't require schedule synchronization. Writing, rather than speaking or meeting, is independent of schedule and far more direct.

Often, not everyone in a meeting needs to weigh in on every topic of discussion.

# If it's important, write it up

If you want someone's opinion on a decision, there are more efficient ways to get that from them than springing a question on them in a meeting.

Due to the time-limits imposed on a meeting we demand an immediate response and rush to decision, increasing the odds of poor decision-making. Give meaningful discussions a meaningful amount of time to develop and unfold by writing them up and inviting others to think about them and contribute without the time-pressure of a “meeting”.

Writing solidifies, chat dissolves. We have team members who work remotely, full-time. Speaking only benefits who’s in the room, writing helps everyone. This includes people who’s couldn’t make it, or future employees who join months from now. Substantial decisions start and end with an exchange of complete thoughts, not one-line-at-a-time jousts. If it’s important, critical, or fundamental, write it up, don’t chat it down.

"Now" is often the wrong time to say what just popped into your head. It's better to let it filter through the sieve of time. What's left is the part worth saying.

Track you ideas in a decentralized list. Review, shortlist, and develop your ideas on your own.

Pitching an idea When an idea feels formed enough, it’s turned into a pitch. A pitch is a fully-formed definition of the problem as well as a proposed solution. You don’t pitch in person — write up pitches and post them to a Monday.com Board for discussion.

# Why we don't pitch in person

We feel it’s better to write something up completely. This forces the floor — the person who’s making the pitch can’t be interrupted. They are guaranteed to be able to present their story completely, exactly as they wanted.

Further, we believe writing things out makes you consider them at a deeper level.

We’re big believers in asynchronous communication — write it down now and other people can absorb it later when they’re ready. Real-time communication in person puts people on the spot. It favors those who are more extroverted and have a more aggressive style of communication over the more gentle personalities on the team. Meetings force synchronization of schedules which is highly inefficient.

And last, when it’s posted to Monday.com, all feedback and follow up questions are automatically attached to the original post. This keeps all communication about the pitch centralized in one place on one page so everyone has access to the same story. One version of the truth.

← Our Values The Way We Work Around Here →